Tweet
April Top 3 apps all dropped their ranking in May and a new number one was Tencent’s card game Happy Lord (QQ version) published in 2013Q4.

Not only app, Tencent is also doing well with their Android app store “Myapp”.
After a long battle with 360 Mobile Assistant, Myapp finally won by slim margin and took number one. Myapp has grown to become one of the largest Android app stores with 26% market coverage and daily distribution volume of more than 110 million that covers 90% of Chinese mobile gaming users. 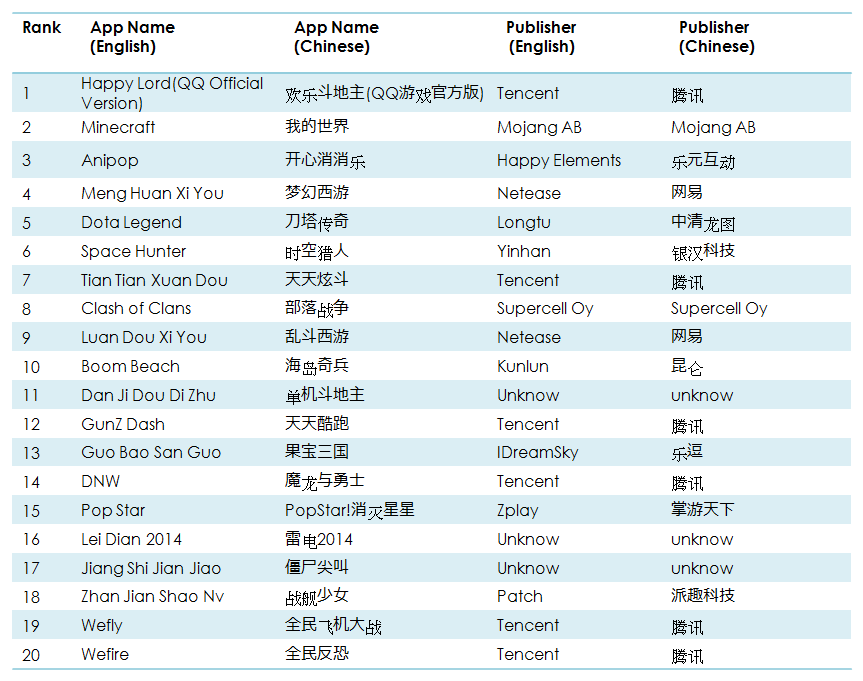 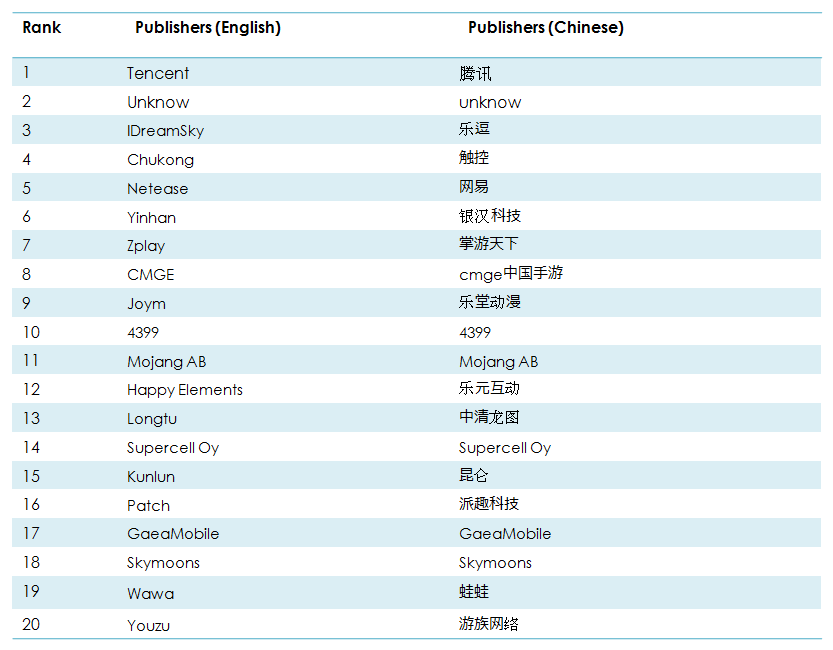 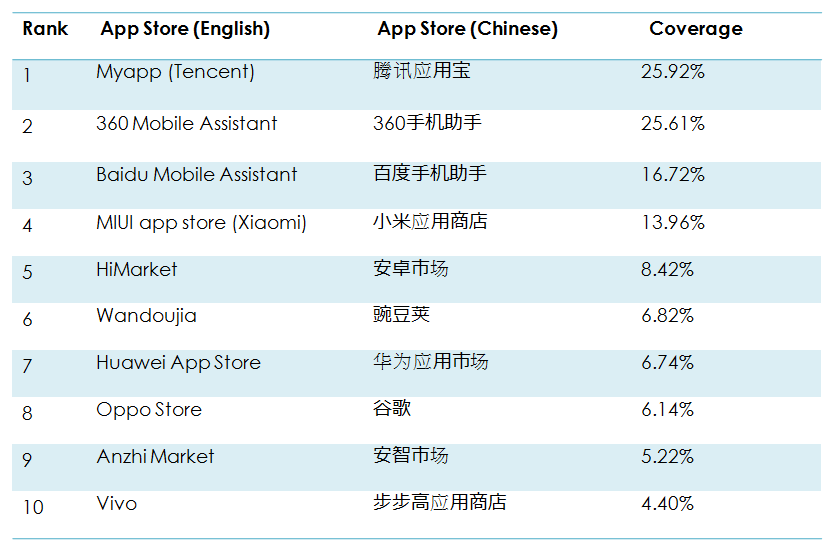 TalkingData is the largest 3rd party mobile data service provider that have been widely recognized and adopted by the whole mobile ecosystem in China. More than 80,000 apps that access over 1.2 billion unique mobile devices in China rely on this mobile analytics platform to track and analyze mobile users’ behaviors. The data collected from these products and also exchanged from the mobile distribution ecosystem enables TalkingData to build the largest behavioral data panel of the mobile population in China. Based on this, they are able to provide the most accurate estimations for the installation, activity and usage of any app in China, especially in the complex Android marketplace.
Tweet

And with that rather Old Snake-esque intro, it's time for this June special issue of the Adways blog! Brought to you by yours truly,Yuji “POCO” Yokota.

The theme for this time is “Japan”, by which I mean PR team said “Write about whatever you like, nerd”. So I think I'll do just that.

So.
The game I'd like to talk about is Square Enix's new killer iOS/Android app, Mobius Final Fantasy. After some 250,000 pre-registrations, upon release the game gathered a staggering 1,000,000 users in a little under ten days. Are you one of them?

Basically, I just want to tell you how ace this game is.
Before we start, I'd like to point out that I'm writing about the game as first released, so if anything's changed, sorry about that. Oh, and this isn't some stealthy marketing ploy either.

If you Google the game, here's a few of the key points that come up:

・Made by the main FF team

・The graphics are sick

・The Dark Knight is a badass

Even if you haven't played this yet (do it), I hope you'll be able to see why everyone's raving about it.

So here I am, abusing my editorial powers to bring you a review of this game -

In the words of Puzzle & Dragons producer Daisuke Yamamoto, Poka-Poka Management (Gradual Management) can be defined as the following:

Poka-Poka Management (Gradual Management) is the idea of ensuring that the user keeps playing. With this logic, game developers can theoretically maximise their profits.

Of course, an important part of this is making sure that the users enjoy themselves, but that's not always the case. In many ways, lesser developers tend to take a leaf out of the Gacha scene's book.

There's a number of cons to this Gacha approach:

・When you get a higher rarity version of the same character, the more common one becomes pretty useless.

・When you combine characters, you'll generally raise the character's skill level, but skills are different between different rarities.

And so on and so forth.
To put it simply, they don't care about your time and money.

No matter how many paid Gacha's you get, most of them will be pretty rubbish. Eventually you'll give in and raise them, the characters and their dupes, until a higher rarity one appears, and you go back to square one. Then after that, the low-rarity Gacha's you raised will get kicked out by paid Gacha's, leaving you to wonder what your life has become.

On the opposite end of the spectrum, we have what Mobius does:

・If you summon (or Grand Summon) a card of high rarity, if you then summon the same card again, it'll also be of a high rarity.
ex) if you summon a 4-star rarity card, all the duplicate cards thereafter will be 4-star.

2. A perfect balance of guidance and challenge
I won't lie, the game's pretty complicated.
But then, who's got the time for awful, long-winded, seemingly endless static tutorial screens? Mobius seems content to leave you with the rough idea, then let you work out the finer details off your own bat (and maybe a little Googling).

If the thing's no fun from the start, you won't want to remember it all, and people generally can't be bothered to ask for help. So that they've managed to still make the game fun with such limited explanation is also wonderful.

To roughly explain the game's battle system:
While controlling the arena's elements, break the enemy's stance with normal attacks and abilities, then use the gap that gives you to inflict massive damage.
When looking at this explanation, you feel like there's something to be desired, but it turns out there's quite a lot of depth to the arena's elements. Try and half-ass it and you'll be defeated right away, so you really do have to think about everything.

Certainly, there are times where victory is guaranteed, but there's limited ways to restore health during a fight, so unless you're insanely overpowered, fights will be really close and thus extremely rewarding.
At the very least, I haven't run into any situations where I thought I'd have to pay to win, so you can go at your own pace. Wonderful.

3. Shady characters
I mean this in the best way possible.
Mobius has some fantastic cutscenes. And the voice actors really deliver strong performances. If you play this one with the sound off, you're missing out for sure.

I don't want to spoil anything, but everyone you'll meet on your quest to become a light warrior is pretty suspicious. It's not the situation so much, but you begin to suspect everyone you meet has an ulterior motive. For this reason, I'm really looking forward to seeing how the story develops.

When I think about recent mobile gaming, the story of Mistwalker's Tera Battle is king, but I think this might just steal its crown. Wonderful.

These three points are the main reasons why I think Mobius is such a killer game. This is one Japanese game makers can be proud of, an ambassador for the scene, and overall a truly wonderful experience.

Without relying on the Final Fantasy name or aesthetic beauty, the game packs a great reinvention of the free-to-play model, a killer battle system, a great story, and so much more. You can't help but be impressed.

Listen up - this is Japanese gaming!


By the way, now that the FFVII remake's been announced, I hope you're all looking forward to reliving it, or, if you're not over 30, to experience this game for the first time.

Tweet
There was a move in app ranking of Chinese Android market in April.

「梦幻西游」(Meng Huan Xi Yo or Fantasy Westward Journey) took the first place where 「时空猎人」(Space Hunter) and「刀塔传奇」(Longtu) were competing for the past 6 months.

「梦幻西游」(Fantasy Westward Journey) is a MMORPG game developed by a leading China-based Internet technology company Netease. Since its launch in Q1 2015, a number of online users who play this game at the same time exceeded 1.7 million (as of May 20th) and it recorded 20 million new registered users (Source: http://www.gao7.com/wy/my/detail-498954.shtm).

All data below is provided by TalkingData. 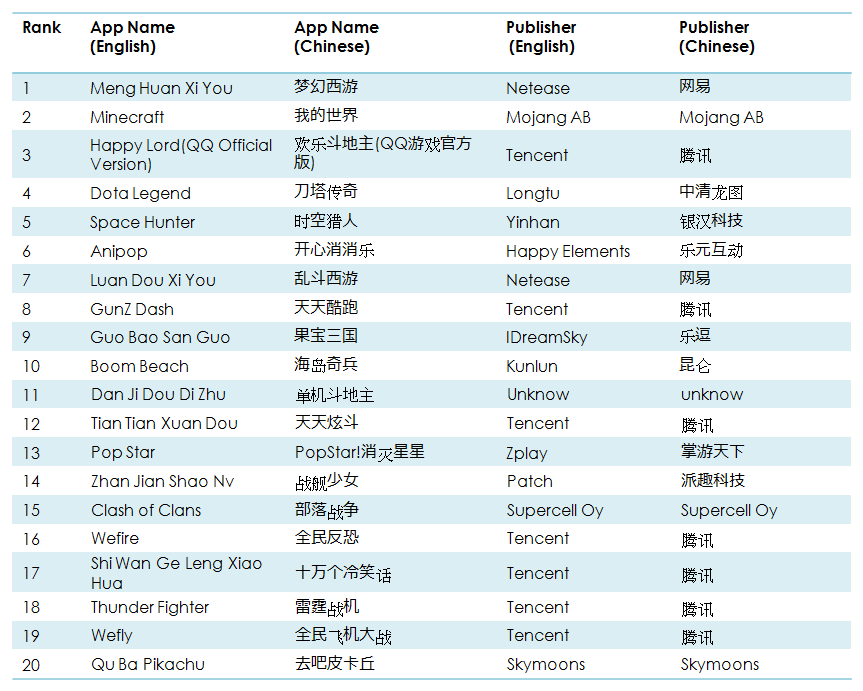 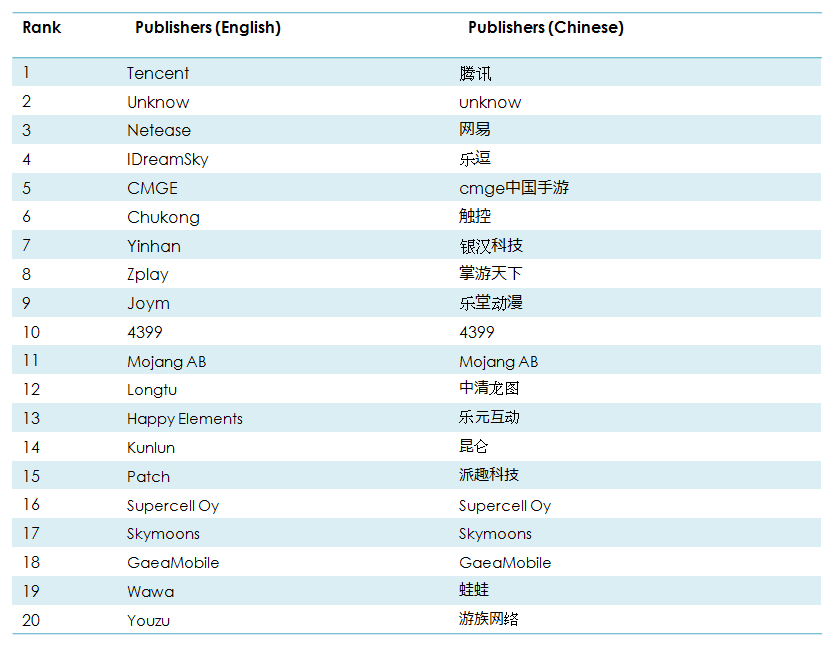