The theme for this article is “Japan”, by which I mean PR team said “Write about whatever you like.” So I think I will do just that. I’ve been in the smartphone gaming industry for about 6 years and which makes me confident enough to write about Japan better than the average (Of course!).

Smartphone app market in Japan is crazy. After the launch of iPhone in 2010, it just keeps growing and growing every year. Back then, iPhone was, of course, the one who had the largest market share. But according to my memory, Android also started to expand after October 2010 when Samsung Galaxy S and Android OS 2.2 showed up in the market. Android devices were not so cool back in early 2010. Variation in the device specifications bothered app developers when developing apps and there were only a few apps that would work properly on the devices. I think this was a fundamental issue for the slow start of GooglePlay (By the way, it was called Android Market back then).

However, Galaxy S specification was outstanding among other Android devices. It operated on Android OS 2.2 with plenty of built-in storage in addition to usage of SD card. This enabled Galaxy S users to install large apps without any difficulty. After 2011, GooglePlay started to chase AppStore and grow rapidly.

A quick digression. Now everywhere I go, there is always someone playing Pokemon Go. It is said that Pokemon Go would not work properly sometimes on cheep SIM-free Android smartphones even though they meet the official requirements of 1. Android 4.4 and up, 2. A strong internet connection and 3. GPS and local services. Because of this, I expect that market growth of GoogPlay would slow down a bit after mid of July 2016.

Japan market is big but very unique with Galapagos syndrome. So, everybody might wonder how many non-Japanese games have found success in Japan market, really? Let’s take a look at top 100 sales and see how many foreign companies I can find.

So, AppStore-12 out of 100 and GooglePlay- 11 out of 100. Wow, only that.
By the way, how many foreign apps have actually gone live each month? I do a regular check on our Yoyaku Top10 platform, Japan’s first-ever app pre-registration service launched in 2013, and I see there are always a couple of new foreign apps coming out every month. Sensuously, I think there are more than 50 being released yearly; however it is just a few of them that could continuously make revenue and recognized as a hit game app in Japanese market.

Because of difference in game elements and national characters between Japan and other countries, it is not always easy to match game content with Japanese gamer’s preference. But why still wanting to go to Japan? What makes Japan different from other countries? - It is high ARPU. Japanese do spend larger amount of money than anybody else in other countries. Japan app market is huge, but the population is small and this naturally means it. This is a graph showing how much money spent per install by country. 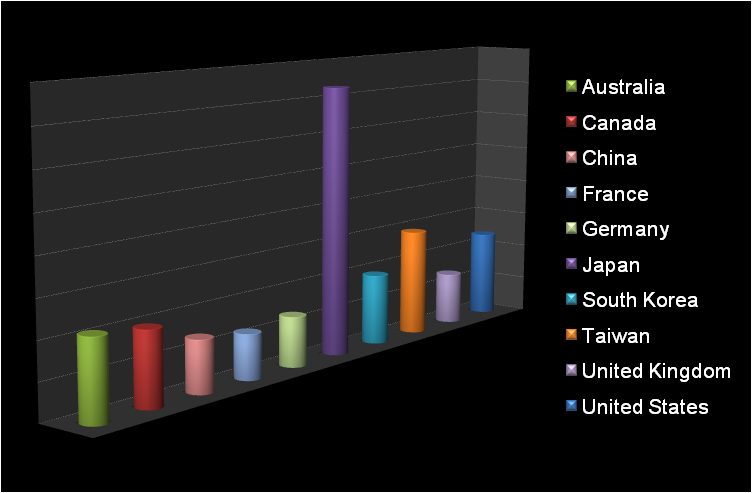 Japan shows just a spectacular size. So, mobile games fight over those Japanese users whose values are incredibly high and this raises CPI at an end. In Japan, re-engagement marketing is quite important. This is because, in the first place, the number of paid users is small but number of new users is also limited. So it is necessary to bring those inactive users back to games and let them play again.

My next article is going to focus on success factors of top sale apps in Japan.